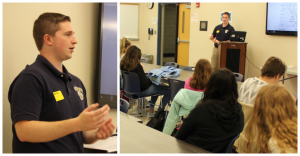 For those looking to keep tabs on this Cohoes graduate, all they have to do is turn on their TV.

Reid Kisselback ’13 is the weekend meteorologist at WNYT NewsChannel 13 in Albany. He recently visited Cohoes High School and detailed for students how he became a “weatherman” and what goes into producing his forecasts.

“I’m looking at forecast models that have more than 50 outputs,” he said. “So we make our predictions based on that collection of information. There are outliers, and once in a while the outliers come true.”

Kisselback said he developed an interest in weather at a young age and was able to pursue it through a science research study program at CHS. He went on to earn a meteorology degree from UAlbany and quickly received his first job offer from a news station in Utica.

“A couple of their meteorologists are UAlbany grads, so they called the head of the department to see if any of the seniors were interested in the broadcast side of meteorology. I was the only one of 14,” he said with a laugh.

Kisselback quickly worked his way back to the Capital Region, a bigger market that includes his hometown.

“It was always in the back of my mind that I’d like the opportunity to come back here if a job came up,” he said.

Students asked several questions about how to succeed at college.

“The amount of work you put in will determine your success,” he advised.

Kisselback also encouraged students to get involved with different clubs and activities in high school and college. He said joining a campus a capella group as a sophomore helped serve as an escape from rigorous course work.

Catch Reid’s forecasts on the NewsChannel 13 weekend news at 6 and 11 p.m.