For the latest reopening updates and information on summer meals, childcare resources and more, please visit our summer resources page. 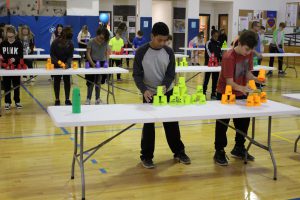 How do you stack up?

That’s what Cohoes Middle School students found out in P.E. class on Thursday as they tried to break a Guinness World Record. They were participating in the 2018 STACK UP! along with thousands of other stackers around the world.

The goal was to have 635,000 people stacking cups, setting a new world record.

“This is the kind of activity that builds confidence,” P.E. teacher Terry Gendron said. “It’s great hand-eye coordination, and it’s usually the non-athletes who find success in this. It levels the playing field because it’s a relatively new activity for everyone.”

This is the second year the middle school has participated in STACK UP! The global effort to reach a new record fell short in 2017.