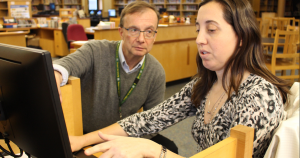 “Hey Google, who is the Google Trainer of the Month?”

“The Google Trainer of the Month is Jennifer Sangiacomo.”

Sangiacomo received the accolade for the month of January among more than 3,000 Google for Education Certified Trainers across the country.

“I was shocked. When I got the email I was completely surprised but it was encouraging to be honored in that way,” Sangiacomo said.

In her role as the district’s Instructional Technology Integration Specialist, Sangiacomo routinely trains teachers and students how to use a variety of tools and applications available through Google. According to Sangiacomo, the tools help students create, collaborate and build their digital skills for the future.

“It’s a natural fit because it’s what kids are used to,” she said. “They’re comfortable understanding and embracing new technology.”

About 20 nominations from staff members were sent on Sangiacomo’s behalf.

“She is always available to help me incorporate activities in my classroom. I feel comfortable asking her questions when I have a hard time figuring something out,” said another.

Before taking on her current role, Sangiacomo was a social studies teacher in the district for 13 years.

“Having that background, I know what motivates students, what will interest them and it makes me more accessible to teachers,” she said.

Sangiacomo became an official Google trainer in January 2017 after passing three certification exams in a matter of only a few months.

“One of the biggest benefits [of Google tools] is being able to access your work anytime, anywhere. For traveling teachers, their work is always there. They can pick up where they left off. Same for students. Their work is saved and they can pick it up at home,” she said.