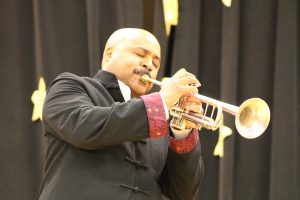 The group has performed in major music halls around the world including China’s National Center for the Performing Arts, Tangelwood’s Seiji Ozawa Hall, and several prominent halls in Brazil and Italy.

“For many of them it might be their first time hearing this type of music, so it’s always exciting to play for kids,” Marsalis said. “I was their age when I first saw a trumpet and it hooked me.”

According to his website, Marsalis was born in New Orleans, Louisiana where he began his musical studies at the age of six. Referred to as a “trumpet prodigy” his solo debut was at the age of fifteen with the New Orleans Symphony. After having won various solo competitions, he received national attention at the age of nineteen performing as soloist with the Boston Pops Orchestra.

“I’ve been looking forward to this for months. I think brass music is one of the prettiest sounds there is,” principal Cliff Bird told his students.