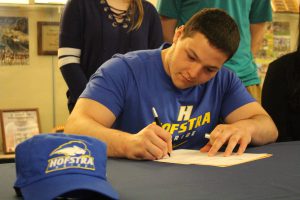 Cohoes senior Reggie Poulin on Friday signed a letter of intent to attend Hofstra University and compete on the school’s wrestling team.

This season, Poulin became the first Cohoes wrestler since 1993 to win a section title. He went on to finish runner-up in the 220 pound weight class of the state tournament.

“It took a lot of hard work, but it was worth it,” Poulin said. “I had high expectations, met them, and now this is the next step.”

Poulin finished his high school wrestling career with a record of 143-46 and was also given a Scholar-Athlete Award by the New York State Public High School Athletic Association (NYSPHAA).

His letter of intent reads:

“On behalf of Hofstra University Department of Athletics, we are pleased to offer you a position on the Men’s Wrestling Team upon your enrollment in fall 2018. The men’s wrestling staff and department of athletics looks forward to having you on campus. Performing at the highest level both academically and athletically is the ultimate goal of a Division I student-athlete.”