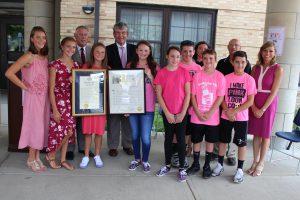 A group of Cohoes Middle School students – deemed “Carli O’Hara and her crew” by Assemblyman John McDonald – were presented on Tuesday with proclamations from the New York State Legislature and the Governor’s office declaring October 26, 2018 as Real Kids Wear Pink Day.

O’Hara started the Real Kids Wear Pink fundraising campaign in 2017 after her grandmother had been diagnosed with, and survived, stage 4 breast cancer.

“Some of the greatest efforts in our country happened because somebody had a bright idea,” McDonald said. “Somebody was inspired by a moment in their life.”

The campaign raised more than $1,000 last school year, and its student-organizers plan to raise even more this year.

“I think you’ve touched a nerve to make us better citizens, and show that you can make a difference at a young age,” State Sen. Neil Breslin said.