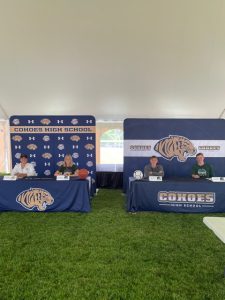 Four Cohoes seniors on Friday signed celebratory letters to continue their athletic careers next year at the collegiate level.

Troy Snyder signed a letter to attend and play basketball at Sage College. Snyder, a three-sport athlete during all four years of high school, was named to the Colonial Council Boys Exceptional Senior Team.

All four students excelled in the classroom as well. Hunt finished with a 90+ GPA, while Huneau, Prouty and Snyder were consistently recognized as NYSPHSAA scholar-athletes. We wish them the best in college and beyond. They’ll always be Cohoes Tigers!