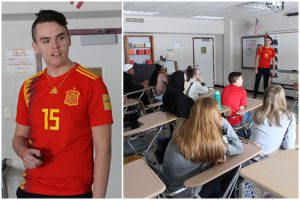 Two days after graduating with the Class of 2018, Joe Ritchie was off to explore Madrid.

“If you ever get a chance to do something like this, even if it’s a little scary, do it,” he told Alicia Ozols’s Spanish class.

Ritchie said the highlights of the month-long trip were getting to visit the stadium of his favorite soccer team, Real Madrid, and the food.

His favorite dishes included mussels and a fried seafood sandwich. He even tried tuna pizza.

“When you live near the Mediterranean Sea, you eat a lot of seafood,” Ritchie said. “Although I did cook a New York-style pizza for my host family and they liked it.”

Ritchie said he learned quickly how to get around using the Metro, Madrid’s rapid transit system. But traveling by bicycle proved to be a little tougher.

“I went on a bike trip and thought it would be easy, but by the end I was hurting. They’re great at biking,” he said.

Ritchie, currently attending Syracuse University, returned home at the end of July, along with his host brother Carlos.

He noted that the Rotary Youth Exchange paid for everything except airfare and spending money, which he funded with a part-time job at Taco Bell.

“It was a great experience,” he said.