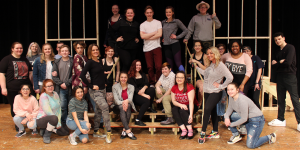 The Cohoes High School Drama Club recently got some pointers from someone who knows a thing or two about their show “Chicago: High School Edition.”

Actress Amy Spanger has frequently performed lead roles in “Chicago” on Broadway, in addition to numerous TV and film credits. Spanger drew from her experience to instruct the cast members at their March 12 rehearsal.

“She’s not only an incredibly talented performer, she’s a great teacher,” director Tara Judd said. “The kids are so lucky to learn from someone so kind and talented.”

Judd and Spanger are friends and met in 2012 at a workshop run by Judd.

“I was a huge fan of her all through college,” Judd said. “This is a once in a lifetime experience for our students.”

“It’s exciting for me to work with young actors and teach some of the things I’ve learned over the years,” Spanger said. “This is a triple threat show, so they need to be able to dance, sing and act at the same time.”

Spanger frequently played the role of “Roxie,” which will be performed by freshman Carissa Shanahan.

“It’s very helpful and inspiring. She knows the tiniest details about the character, like what to do with your hands, how you say certain lines,” Shanahan said.

Note: Like many other district activities and events, the drama club’s production of “Chicago” is on hold, but we wanted to share this experience with the Cohoes school community. Just from the short preview we saw, it’s clear our incredibly talented students are doing an amazing job with a complex show. We hope we get to see it soon!