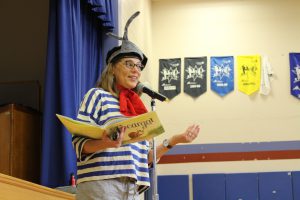 Dashka Slater, an award-winning journalist who writes for publications such as The New York Times Magazine and Mother Jones, visited Abram Lansing Elementary School on Thursday. Slater enthusiastically read her children’s picture book Escargot for a crowd of pre-K to first grade students.

The book, about “a snazzy little snail who wants to be a pet,” was clearly familiar to many students. They read along while donning hats that said “Snails are my favorite animal.”

After the reading, Slater showed pictures of her favorite types of snails, including the giant land snail.

“They are sometimes found in Florida, munching on people’s houses ‘crunch crunch crunch,'” she said.

According to her website, Slater’s children’s books have received a number of prestigious awards, including Booklist Editor’s Choice, Junior Library Guild selections, Wanda Gág Read Aloud Book Award, Chicago Public Library Best of the Best, and the Surrey Picture Book of the Year.