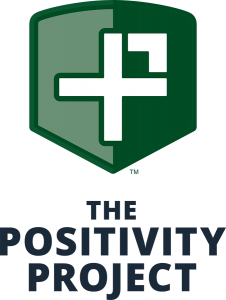 Let’s face it: students are busy. Between studies, sports, clubs, and many responsibilities outside of school, they have a lot going on. Once they enter high school, students have even more to deal with.  There are challenges of new courses, not to mention questions about their future. It’s no wonder that their mental health is just as important as their educational goals. They need both to succeed.

For that reason, the school has adopted a character education program called the Positivity Project. This nationwide program teaches 24 positive psychology strengths and empowers students to build positive relationships.

Currently in their second year using the program, Mr. Santarcangelo describes it as a natural transition from Second Step, which is taught at the elementary and middle school level.  The high school team tailors the program to meet the needs of the high school students and focuses on about half of the traits.

“We incorporated our own questions, discussion prompts and short videos which we felt  related directly to the needs of our students,” Mr. Santarcangelo said, taking into account feedback from students and staff on what they thought was important to focus on.

They also focus on “other people’s mindset,” which is knowing how words affect others, appreciating the good in others, cheering others’ success and supporting others.

Teachers spend two weeks a month on each topic. They show 8-10 short inspirational videos that help open up discussions in class.

Typically, the ninth grade teachers go a little more in depth with the program, since the transition from middle school to high school is a new experience for all.

Mrs. Frost’s ninth graders learned vocabulary words and expressions related to emotions and other areas such as anti-bullying. In one activity titled, “5 Things I Can Do When I’m Angry,” they used French verbs like meditating, exercising, deep breathing, etc.

For their lesson about “purpose”, Ms. Frost’s sophomore students impressed her with their comments relating to what the word means to them. “I thought several were quite insightful, given that most of them are around 15 years old,” she said.

Mrs. Ozols conducted an activity intended to strengthen students’ understanding of character strengths and enhance their intrapersonal skills.  They considered what they were thankful for, highlighting the importance of gratitude in their lives.

They also wrote anonymous notes that they place in a gratitude jar; a note a day is randomly pulled out and read to the class, setting a positive tone for that day.

“Students like the conversation and the break from traditional instruction,” said Mr. Santarcangelo.

One student, a senior, agreed. “It’s fun and makes classes different from the normal class while also teaching us something at the same time.”

“I like what we’ve done with it,” said Mr. Santarcangelo. “If we help one kid learn something about it, it’s worth the time and effort. Grades are paramount, but being a good person is equally important.”