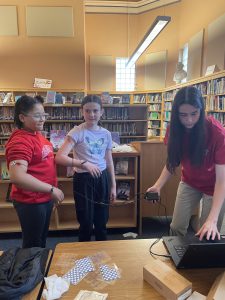 It’s part of the RPI Engineering Ambassadors (EA) program, which began in 2011 with a mission to “provide an assembly of highly motivated students who drive to inspire a younger audience to explore the role of engineers in society.”

And inspire they do! Students in each grade had the chance to work on exciting projects during their science and technology classes. The projects required teamwork and thinking outside the box, but they also had one thing in common: they were fun!

The RPI students began each class with a slide presentation before launching into the hands-on activity on topics that included: Fluid Dynamics, Nanofluidics, Thermoelectric Devices, Getting into Orbit and the Design of an Athlete. 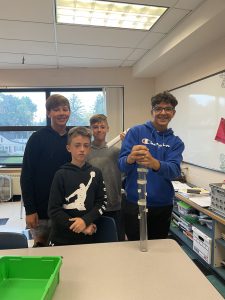 Students asked many great questions, such as, “If the thermoelectric plates work off of waste heat produced by fossil fuels, will they still be helpful if we switch to fully renewable energy?” and “Are thermoelectric plates food safe? Could we use them to help people without electricity stay warm or cook food?”

However, the kids were also interested in learning about the Ambassadors themselves. Questions such as, “Where are you from?” “How did you know you wanted to go to college?” “What is your day like as a college student? “Do your classes have a schedule like ours?” put a personal spin on the visit. 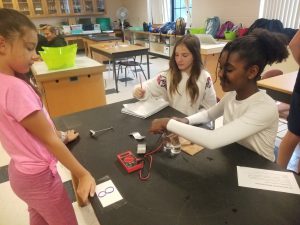 They also asked about potential career paths based on specific degrees. Some of the RPI students already have plans to design aircraft for Boeing, and some have already worked with NASA and the space program.

Between the presentations, projects and questions about college, CMS students came away with much to think about regarding a possible career in STEM.

Thank you to RPI and the Engineering Ambassadors Program for inspiring our students!