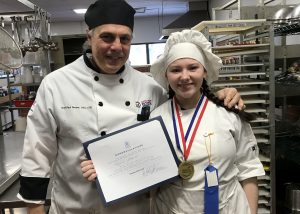 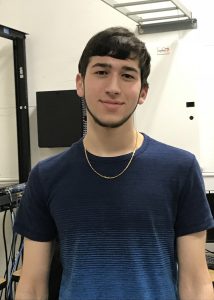 Two Cohoes students are moving on to the state SkillsUSA competition after placing first in their respective fields of study at the regional competition last Wednesday. Abby Grant took the top spot in the commercial baking category while Thomas Ascenzi triumphed in internetworking.

“I was really nervous when I got there, but then I realized I was in my element and I just did it,” said Grant, who also won a $1,000 scholarship from Schenectady County Community College, which she will use this fall as she attends the college to pursue a culinary degree.
“It’s unreal. I never expected that,” she said.
In Ascenzi’s competition, he had to do everything from make an Ethernet wire to complete a switch. With the win, he will be making his second trip to the state SkillsUSA competition and hopes to improve on last year’s second place finish.
“Hopefully I can do it this year. I have the experience now, so I will bring my A-game and hopefully win states,” he said.
The state SkillsUSA competition will be conducted April 25-27, 2018 at the New York State Fairgrounds in Syracuse. Winners of that event will advance to the national competition in Kentucky in June.