All Cohoes schools are closed until at least April 15 due to the ongoing COVID-19 public health situation. For updated information from the school district, including important notices, learning resources, and food distribution plans, please go to this page. 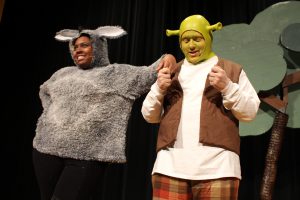 There will be four performances. Friday and Saturday evening shows begin at 7 p.m. and Saturday and Sunday matinees start at 2 p.m.

Based on the Oscar-winning DreamWorks Animation film, ‘Shrek The Musical’ is a Tony Award-winning fairy tale adventure, featuring all new songs from Jeanine Tesori (Thoroughly Modern Millie; Caroline, or Change) and a side-splitting book by David Lindsay-Abaire. Shrek brings all the beloved characters you know from the film to life on stage and proves there’s more to the story than meets the ears.

“Once upon a time, there was a little ogre named Shrek….” And thus begins the tale of an unlikely hero who finds himself on a life-changing journey alongside a wisecracking Donkey and a feisty princess who resists her rescue.

Shrek will be played by Cohoes junior Jakob Marer.

“I like Shrek because he doesn’t care what anyone thinks of him,” Marer said.

Junior Sajaira Hudson and sophomore Acelynn Lewis will take on the roles of Donkey and Princess Fiona.

“My favorite part is that I get to be sassy,” Hudson said. “Donkey is also an amazing friend and I try to be a good friend to everyone.”

The cast and crew, comprised of about 30 students, have been rehearsing since January and are hoping their hard work pays off. For the first time, the Cohoes High School Drama Club will participate in the High School Musical Theater Awards at Proctor’s Theater in Schenectady on May 19.

“We haven’t put on a show with this level of grandiosity,” said Drama Director Christian Gunn. “There are advanced harmonies and dance numbers, plus students are doing everything from tech to set design and construction, and directing.”

Admission is $10 for adults and $7 for children/seniors.